Skip to Main Content
It looks like you're using Internet Explorer 11 or older. This website works best with modern browsers such as the latest versions of Chrome, Firefox, Safari, and Edge. If you continue with this browser, you may see unexpected results.

Welcome to the William James College Board Game Library! 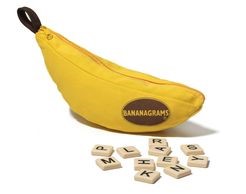 Description: Bananagrams is a fast and fun word game that requires no pencil, paper or board, and the tiles come in a fabric banana-shaped carrying pouch. One hand can be played in as little as five minutes. Using a selection of 144 plastic letter tiles in the English edition, each player works independently to create their own 'crossword' faster than one's opponents. When a player uses up all their letters, all players take a new tile from the pool. The object of the game is to be the first to complete a word grid after the "bunch" of tiles has been depleted. There are variants included in the instructions, such as Banana Smoothie and Banana cafe for limited set skills or space-deprived places, and the game is suitable for solo play.
(From Board Game Geek.)